Certified Safe Software Service (TMCSSS) v1.069.00 of Endpoint Application Control (EAC) will be released on April 30, 2015 and has the following new features:

After the pattern update, TMCSSS-based 64-bit applications will not be visible in the application name. 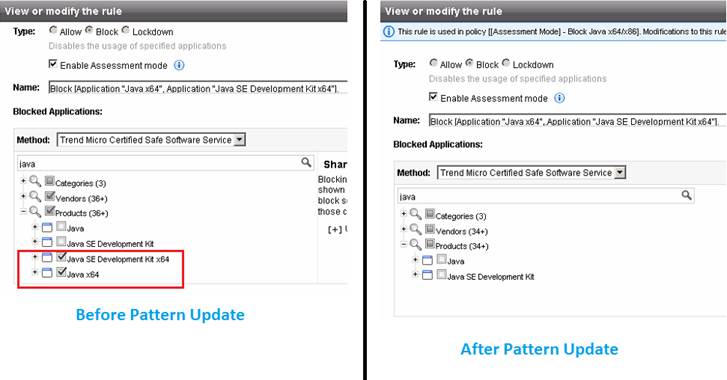 Customers affected are those who are using Endpoint Application Control 1.0  and above, with rules that include 64-bit applications based on TMCSSS pattern.

Before the pattern release date on April 30, edit your rules by selecting both 64-bit and 32-bit TMCSSS-based applications. For example, select both “Java” and “Java x64” applications so that the policies using the rules will still be able to detect 64-bit version of Java application whenever it is running on the system.

There is no need to recreate the policies and rules. All you have to do is update the affected policy by editing the rules and selecting the new name that contains both 32-bit and 64-bit applications.
Premium
Internal
Partner
Feedback
Did this article help you?