Adwind started as a proof-of-concept and was previously named Frutas in 2013. This proof-of-concept was originally available free in Spanish and later translated to English. It was offered for sale as a premium Remote Access Tool (RAT) and eventually renamed to Adwind. Prices ranged from $75 for a single license to $250 for multiple licenses.

Adwind malware evolved yet again and was then rebranded as UNiversal REmote COntrol Multi-Platform (UNRECOM). With its enhanced functionalities such as disabling of AV product and other iterations, this malware now threatens the digital world. 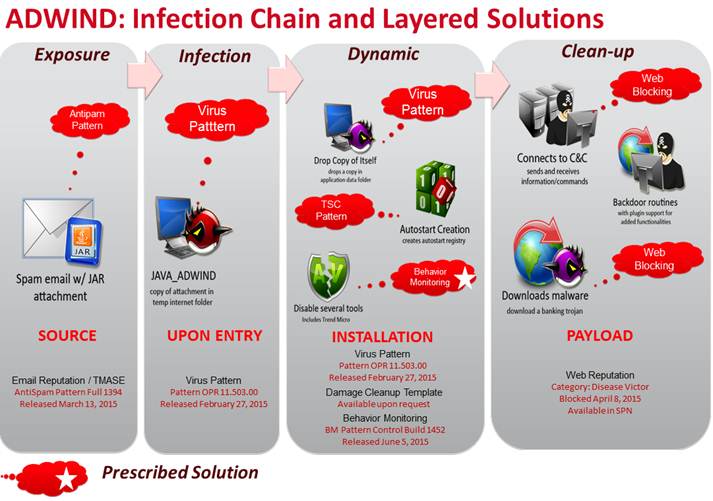 Details
Public
Make sure to always use the latest pattern available to detect the old and new variants of JAVA_ADWIND.

Refer to the Product Administrator’s Guide on how to enable the Email Reputation or Web Reputation services features.

For JAVA_ADWIND, the attachment can be filtered or blocked using file extension (eg. *.jar)

The policies above are usually placed after the following rules:

The objective is to reject all known spam mails and known malwares and at the same time, get a high confidence sample file that will be submitted to support for further analysis.

The link above you should give you an idea on what type of sample files can be collected during an outbreak.

For new cases you may upload 1 ZIP or RAR file (up to 50 MB) that is protected with the password "virus" to this link.

FTP will be helpful for other samples. ZIP or RAR files that is protected with the password "virus"

Please resend all quarantined mails from MSA or SMEX server side to specific recipient for sourcing. To resend a message that is displayed in the Quarantine Log, place a checkmark in the box corresponding to that message’s row in the log and then click Resend.

Spam from client side can be pulled out from either spam folder or junkmail.folders.