Summary
TESLACRYPT, detected as Ransom_CRYPTESLA, which appeared at the start of 2015, was initially a clone of CryptoLocker (Ransom_CRILOCK) as seen in its ransomware message while employing "elliptic curve cryptography" for its encryption. It then moved on to use CryptoWall’s (Ransom_CRYPWALL) template.

A unique feature of this ransomware is its support for encrypting gaming-related files. A few examples are games like Minecraft, Starcraft II, and World of Warcraft.

Initially, TeslaCrypt left important files (key.dat, storage.bin) in the user’s machine that may enable the user to decrypt the ransomware-encrypted files. In December 2015, a decryption utility was made public, allowing users to recover their files by generating the decryption key from an encrypted file. This was true for TeslaCrypt 2.2.0 and below. However, a new version (3.0.0) surfaced in January 2016 which fixed this workaround. 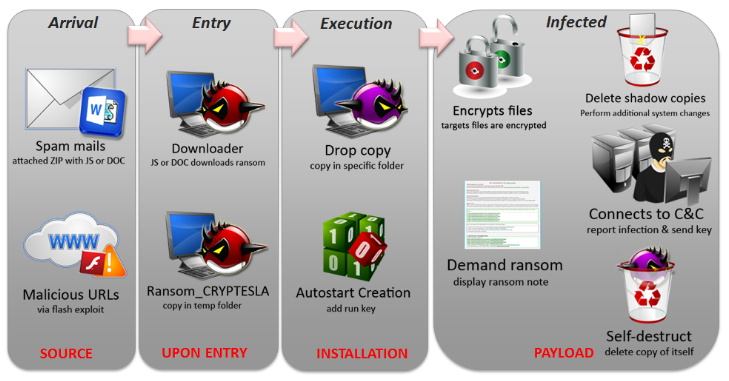 Make sure to always use the latest available pattern to detect old and new variants of Ransom_CRYPTESLA.
Details
Public

*Refer to the Product Administrator’s Guide on how to enable the Email Reputation or Web Reputation services features.