Security researchers found an advanced backdoor embedded in the server management software products of NetSarang. The backdoor named ShadowPad, which is detected by Trend Micro as BKDR_SHADOWPAD.A, is capable of downloading and executing additional malware, as well as stealing data.

The backdoor was embedded into one of the code libraries (nssock2.dll) used by the following products:

Build numbers before and after the builds mentioned above are not affected.

The location of the nssosck2.dll file on Xshell 5.0 Build 1322 is shown below:

It is designed to run in two (2) stages as explained in the following diagram:

On the first stage, the embedded shellcode gathers basic information like network parameters, username, and system time. Afterwards, it forwards these information to the validation C&C servers. It uses domain generation algorithm (DGA) so the domain name changes depending on the month and year based on the system time.

According to the researchers, if the attackers considered the system to be “interesting,” the C&C server would reply and activate a fully-fledged backdoor platform that would silently deploy itself inside the attacked computer. This is where the second stage begins. On command from the attackers, the backdoor platform would be able to download and execute further malicious code and perform different types of data exfiltration.

Based on the information collected from Trend Micro's Smart Protection Network dated August 16 to September 25, Asia Pacific has the most number of detections related to ShadowPad. 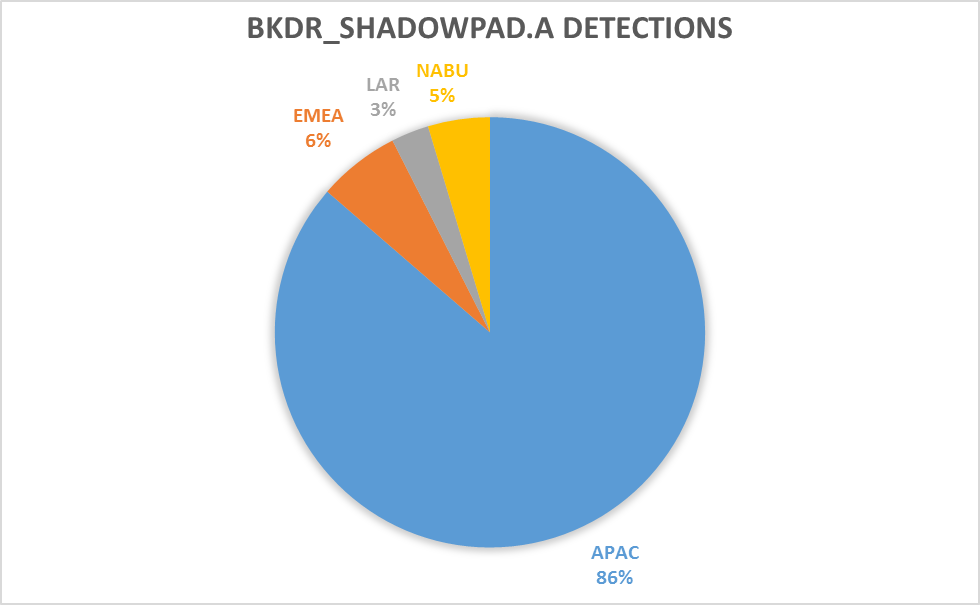 TippingPoint customers are protected from attacks via the ThreatDV Filter 29425 - DNS: ShadowPad Checkin.

Best Practices for IT Administrators

Here are some more tips to protect your network:

​
Premium
Internal
Partner
Feedback
Did this article help you?