Summary
On February 11, 2019, a first-of-its-kind container escape vulnerability in runC was publicly announced, which in the right (or wrong) circumstances, could lead to an attacker gaining root privileges and gaining complete control on the host running the container.
This vulnerability is not limited to one specific type of container since runC is a low-level Linux tool that is at the heart of most, if not all, popular container runtimes in use today.
Based on the technical analysis, a possible exploit could be triggered simply by running a malicious image - which when run on a host - could allow the runC component on the host to be overwritten by a specially-crafted binary and executed; leading to the attacker gaining control of the host.
Please note that this vulnerability could potentially be exploited when attaching to a running container; however the container image must have already been compromised.
Details
Public

The first order of business to protect against any sort of known vulnerability is to patch (if available). However, there are some other steps that can be taken to also help protect users:

Trend Micro Deep Security customers also have another line of defense against potential exploits using one or more of the controls outlined below.

Setting up Trend Micro Deep Security Application Control helps administrators to continuously monitor for software changes on protected servers and is intended for use on stable servers that do not undergo frequent software changes (like workstations).

In a situation where runC is compromised, Application Control's whitelist can help raise a critical flag in the case of a potential attack due to the modified runC binary not being recognized. This flag may appear as an entry in the Deep Security SYSTEM EVENT section (sample below): 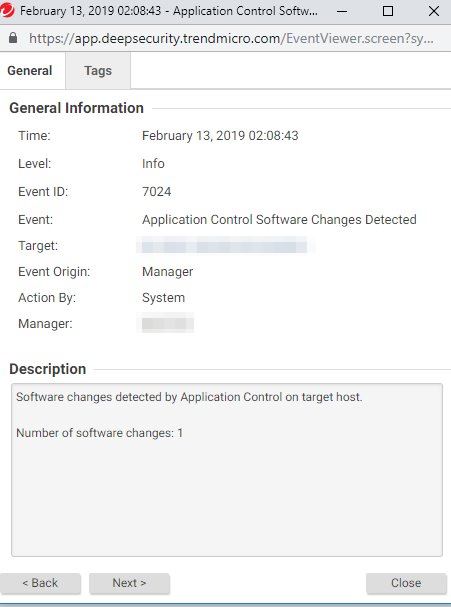 For this particular exploit, the event information above would be a flag to investigate further and take additoinal actions such as initiating an on-demand Deep Security Integrity Monitoring scan.

Ensuring the integrity of the underlying operating system is paramount.  To leverage this particular vulnerability, an attacker would most likely overwrite or somehow manipulate the existing runC binary.  Environments that enable Trend Micro Deep Security's Integrity Monitoring protection allow administrators to keep a close eye on changes made to files and critical system areas that could indicate suspicious activity.

Due to the unqiue nature of this exploit, it is highly recommended that administrators utilize scheduled and/or on-demand Integrity Monitoring scans in addition to real-time scans (if enabled) for maximum protection.

The following Trend Micro Deep Security Integrity Monitoring rule detects changes to any binaries in the /usr/bin and /usr/sbin directories:

This is significant, because these are common locations in which the runC binary resides in many containers.  Note that this rule is deployed out-of-the-box and is already enabled without additional configuration required.

In case of an attack on Docker, a change detected by Integrity Monitoring could generate an alert similiar to the one below (key areas of the alert highlighted): 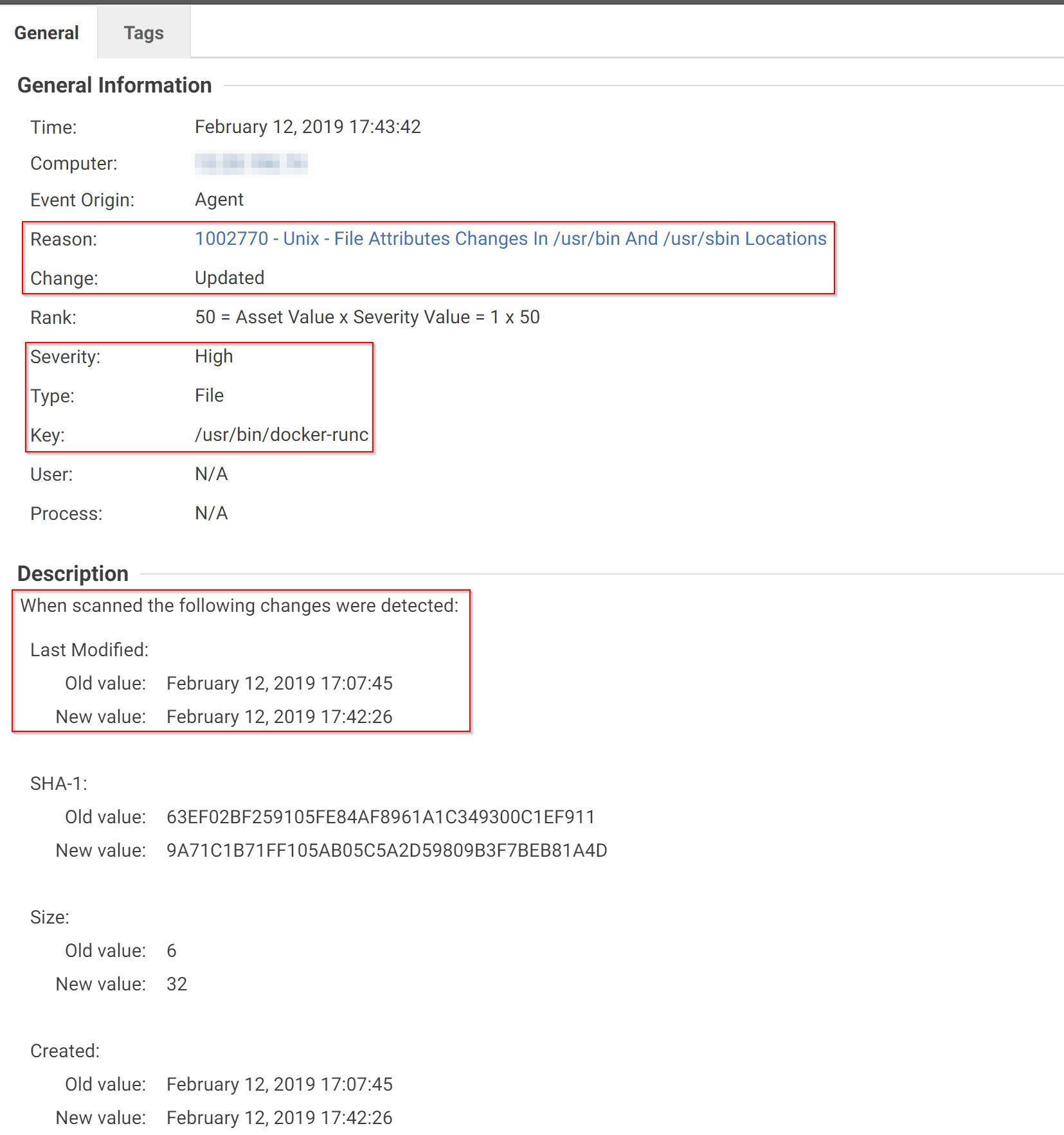 An additional Integrity Monitoring rule is also available that covers a wider range of Docker-specific artifacts across the system and not just limited to the runC binary.  This rule takes a wholistic approach to monitoring the integrity of a Docker installation across the host - such as files, directories, installed software and application processes:

An event for Docker could appear similar to the one below: 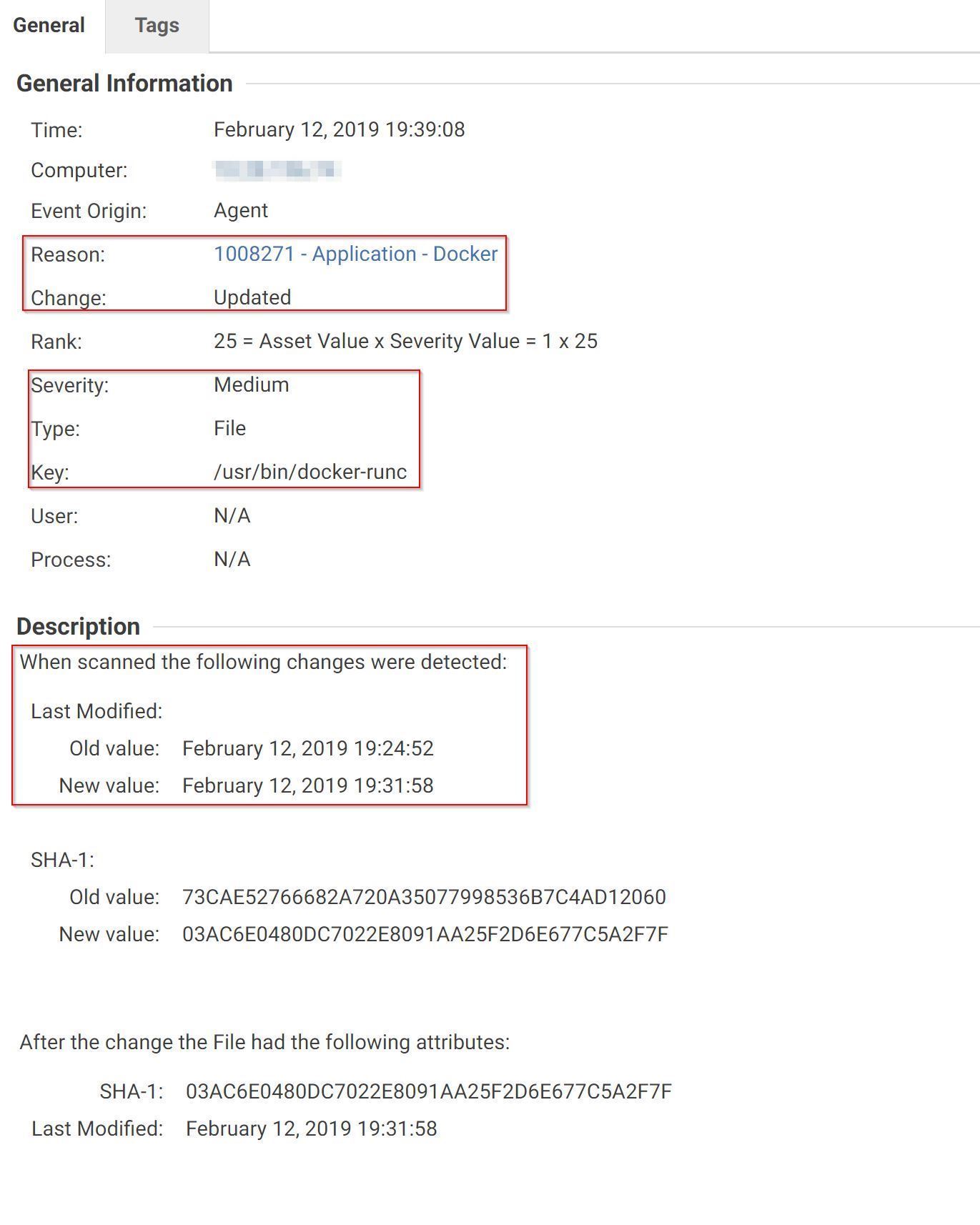 More technical information on the vulnerability, as well as specific vendor advisories can be found on the following links.