XOR DDoS is a Linux Trojan malware with rootkit capabilities that was used to launch large-scale DDoS attacks. Its name stems from the heavy usage of XOR encryption in both malware and network communication to the C&Cs. It is built for multiple Linux architectures like ARM, x86 and x64.

In 2014, a whitehat security research group detected a one-liner shell script being injected via ssh connection. The hack scheme is to spread a new DDoS mechanism using ELF to infect Linux based computers. A third party AV company concluded that the installation is customized to the victim's Linux environment for the sake of running an additional rootkit component.

Malware routine can be found on the following virus reports:

The malware is usually found on Linux based servers. Since the malware has a capability to hide itself using its rootkit capabilities and XOR encrypted C&C communication, un-monitored and un-protected servers may not report the infection unless an administrator is able to see the unusual processes running or unusual connections to un-familiar IP addresses.

The threat investigator should look for the following visible indicators: 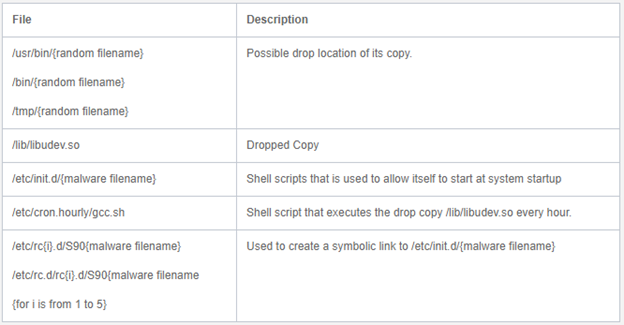 Trend Micro Deep Security for Linux should be able to detect and clean this malware.

There are times that the DS agent doesn’t have permission to the locked file, so make sure that there’s no running process or service of XORDDOS (random characters), to fully clean this infection.

Unix - Open Port Monitor (This rule monitors and logs for ports "Created" and "Deleted" in a Unix environment.)

For machines that have recurring detection, you can use ATTK for Linux and submit the logs to us for further analysis.